At the dismissal hymn of the Nativity of the Theotokos, on September 8, we were introduced to the overarching theme of the liturgical year: Christ as the Sun of Righteousness, the Light of the World. As we sing to the Virgin, “from you arose the Sun of Righteousness, Christ our God,” banishing the darkness of death and bestowing eternal life. The liturgical year, from its inception, is already pointing us forward to Pascha, to the death and resurrection of our Lord.  Now we come to the autumn equinox, where the declining day begins to make itself felt with an ever colder touch. So let us contemplate the meaning of our celebration of St John the Forerunner on this day, who lights the way to Christ for us.

The Gospel of John opens up with a strange contrast between St John and Jesus: “There was a man, sent from God, whose name was John; he came as a witness to bear witness to the light, so that all would believe through him. He was not that light, but came to bear witness to the light.” As the Gospel unfolds, this contrast is developed: John is not the Logos, but he is the “voice crying in the wilderness”; he is not the bridegroom, but “the friend of the bridegroom”. He is not the light, but he is a “burning and shining lamp”. This is why John says that Jesus “must increase, I must decrease” (Jn 3:30).

Hence, it is striking that St John’s feasts which anticipate Christ’s major feasts by six months, also coincide with the decrease of daylength, starting with his birth at the summer solstice, and now at the equinox. For as Christ tells us, John “was a burning and shining lamp, and you were willing to rejoice in his light for a while” (Jn 5:35). He is a vigil lamp, and as brightly as they may shine vigil lamps eventually run out of oil.

This solar theme of John’s feasts at the summer solstice and the autumn equinox is made explicit in the hymnography, as can be seen in the dismissal hymn, which picks up on the messianic Sun of Righteousness theme: “Rejoice, O barren one,” we sing to Elizabeth, “who did not bear before, for you have indeed conceived the lamp of the Sun.” He is, according to the aposticha at vespers, John the Forerunner, “lamp of the Sun, prophet of the Most High, voice of the Word and Divine Son, Who will spring forth from the Virgin.” The verb “spring forth” anatello, is the particular Greek word used to refer to the rising of the sun at dawn. 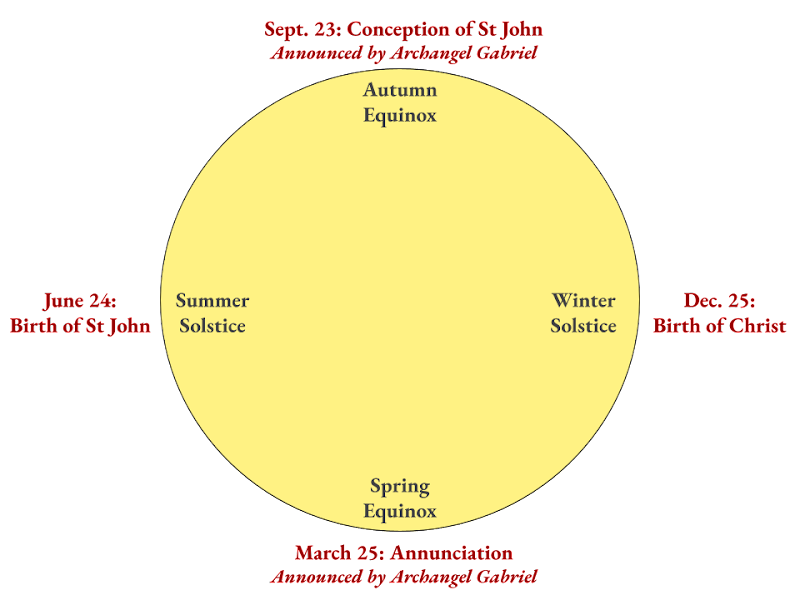 In my estimation, John is the Forerunner of Christ in no less than seven ways:

and lastly,  because of the commemoration of his feast days six months before Christ throughout the liturgical year, 7) he is a “liturgical forerunner” of the Sun of Righteousness.

John proves a worthy witness of Christ’s unfading light, by being commemorated on those days of solar shifts when the light begins to wane. It would be somewhat unfitting to commemorate Christ the Unfading Light when the light starts fading, but the humble and yielding John, who considered himself unworthy to baptize Him, or even to untie the straps of His sandal, now makes way for the King.

St John is an especially significant guide for us in our times, not just because of his constant cry for repentance, but because he reconnects us with the cycle of nature, from which we have been so deeply alienated. Hardly any of us are tuned to the solar year, except perhaps for those whose minds wander with the star charts of their astrology apps. In this regard, St John is ready to intercede for us and to set our paths straight, in alignment with the natural cycles that God has created for us.

Cycles of Fire and Light

But why, in the first place, is there any need to go through cycles to encounter God? Certainly, the Lord of Nature knew what He was doing when He tilted the earth’s axis. He wanted to give us the blaring radiance of an August sun, and the abundant crops it brings, without, however, our being overwhelmed by its heat. Likewise, St Gregory the Theologian explains that we cannot bear the brightness of God’s glory, so He gradually accustoms our eyes to His radiance,

“lest perhaps people might, like men loaded with food beyond their strength, and presenting eyes as yet too weak to bear it to the sun's light, risk the loss even of that which was within the reach of their powers; but that by gradual additions, and, as David says, Ascents, and advances and progressions from glory to glory, the Light of the Trinity might shine upon the more illuminated. For this reason it was, I think, that [the Holy Spirit] gradually came to dwell in the Disciples, measuring Himself out to them according to their capacity to receive Him, at the beginning of the Gospel, after the Passion, after the Ascension, making perfect their powers, being breathed upon them, and appearing in fiery tongues” (Or. 31.26).

Think about the final Feast of our Lord in the heat of August, the Transfiguration, where all His glory is unveiled. See how little His own apostles can bear the revelation: they lie contorted and pining before Him.

Along these lines, we can better understand our constant need to be prepared by His forerunner John. “Every tree that does not bear good fruit is cut down and cast into the fire” (Lk 3:9), “I baptize you with water” but “He will baptize with the Holy Spirit and fire” and “the chaff He will burn with unquenchable fire.” These are all images related to the harvest. That is a good way to think of the reckoning to come: we are given a whole year of grace to prepare for the next harvest.

John’s allusions to the chaff and fire are also highly reminiscent of the Messianic prophecy from Malachi 4, which foretells the Day of the Lord, the burning of the chaff, the coming of Elijah, “but to those who fear my name, the Sun of Righteousness will rise with healing in His wings.” So for those who prepare through repentance, the Light will appear with the gentle, healing rays of the Sun, and not as a “consuming fire” (Heb. 12:29).

Beyond the Shadow of a Doubt

The hymns for St John’s Conception dramatize the dialogue between the disbelieving Zachariah and the Archangel Gabriel. This gives us occasion to point out a hidden theme of the liturgical year: the battle with disbelief. It is likewise connected to the solar theme. The Christian year casts light on the shadows of doubt that linger in the corners of our mind.  In this commentary, we hope to show how the liturgical wisdom of the Church does not shy away from dealing with the human struggle with disbelief.

It is not just the sinners, but the saints, who contend with angels. Even at the Nativity of Christ, Joseph is depicted in a corner, being tempted by Satan to doubt the Virgin birth. When Christ rises from the tomb, Thomas doubts His very resurrection. Nevertheless, against all these doubts, St John stands as a steadfast witness in the heavenly court. In contrast to the doubt of his father Zachariah, who is chastised by being deprived of his voice, John is the “voice crying in the wilderness,” outspoken in his boldness. His role as witness begins already from his mother’s womb. And instead of being rebuked by an angel, he does the rebuking, like an angel.

Each mark of doubt, when overcome, becomes a sign in the chain of divine proofs. Elisabeth’s miraculous conception of John becomes a sign to Mary that she too will conceive; the Virgin birth becomes a sign of Jesus’ true identity as God; His seeming weakness at the cross becomes the sign of his divine power; the wound He bares before Thomas becomes the proof of His resurrection; “for my power is made perfect in weakness” (2 Cor. 12:9).

Lastly, we do well to remember that, the Sunday following the Conception of St John, we begin the cycle of the Gospel of St Luke; the reason for the beginning of the leap to the “Lukan cycle” is because St Luke records St John’s conception in his gospel. “followed all things closely for some time past” and gives us the most painstaking, orderly account of Jesus’ life, passion, and resurrection. In his sequel, the Acts of the Apostles, Luke summarizes that his gospel concerned the things Jesus “began to do and teach”, meaning He is still doing and teaching, and how “He presented Himself alive” to his disciples “with many proofs” (Acts 1:1-3). Luke is the one who gives us that golden chain of proofs, starting with St John’s conception, and still binding our hearts to the Lord.